Lasco Financial Services Limited (LASF), for the nine months ended December 31, 2017 recorded trading income of $1.09 billion; this represented a growth of 37% when compared to $794.46 million posted in 2016, while trading income for the quarter amounted to $407.48 million (2016: $288.25 million). according to LASF, “This is attributed to seasonally strong remittance and cambio inflows bolstered by the income from its new acquisition. LASF acquired 100% shares in Scotia Jamaica Microfinance Company Limited (CrediScotia) through a Share Purchase Agreement effective December 1, 2017. LASF Group now comprises two (2) subsidiaries, CreditScotia, renamed LASCO Microfinance Limited and LASCO Financial Services (Barbados) Limited.”  Other income amounted to $31.36 million(2016: $35.95 million), a decrease of 13% year over year. This resulted in overall income of $1.12 billion, a growth of 35% compared to $830.41 million for the corresponding period in 2016. Overall revenue for the quarter was $404.90 million (2016: $297.68 million).

LASF noted, “The acquisition of a loans company was one of LASF’s key strategic options to expand its loan business. Over the past year, we have expanded our branch network, team and services in our quest to carve out a significant market share in the Micro Loans business. The acquisition of CrediScotia ,added to its already very strong remittance business, immediately positions LASCO Financial Services Limited among Jamaica’s strongest financial services companies. In the coming months, LFSL will combine its loan business into the subsidiary company and focus on the continued opportunities to serve the market which aligns with our LASCO philosophy and strategy of financial inclusion. The combined businesses will own a network of 13 branches, a large customer base and large loan portfolio.” 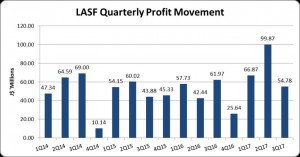 The information contained herein has been obtained from sources believed to be reliable, however its accuracy and completeness cannot be guaranteed. You are hereby notified that any disclosure, copying, distribution or taking any action in reliance on the contents of this information is strictly prohibited and may be unlawful. Mayberry may effect transactions or have positions in securities mentioned herein. In addition, employees of Mayberry may have positions and effect transactions in the securities mentioned herein.